Marvel fans have to wait a bit more as the release date of Eternals has been pushed back again! The Eternals, sorry, now it is just Eternals, is one of the most anticipated upcoming movies. Fans have already started their discussion, and many theories are born. Questions like-will this movie crossover the forthcoming Guardians of the Galaxy Volume 3? James also tweeted about the change in the name of the movie. The cast of the film is reliable and very impressive. Who is part of the cast, and the bigger question is when is it hitting the screens? Without any further delay, let’s get into it.

My friends at @MarvelStudios did me the favor and gave me the “The.” Thanks, guys! 🙏 https://t.co/gUds8nspmI 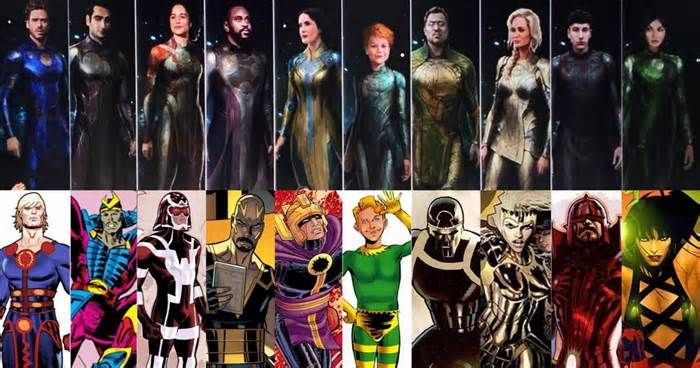 Eternals has become a yummy looking cake that gets snatched from you again and again as you open your mouth to eat it. Initially, 6th November 2020 was set as the release date, but the COVID-19 pushed it back to 12th February 2021. It was a bummer for fans, as they got to wait four months longer. Now the word has come that the movie will be hitting big screens on 5th November 2021.

Eternals is not the only one that is moved on the release schedule of Marvel. Other films like Black Widow have also been delayed. Even the release dates of other superhero movies like Wonder Woman 1985 were not static. If you wonder that the filming might be incomplete, rest assured, shooting finished in February 2020!

The cast is enough to pull you towards the movie.  Many big names are involved in this movie. First of all, one of the Hollywood A-listers, Angelina Jolie, is playing a Powerful character named Thena. Angelina told us that the training she went through for her role was intense. It included everything ranging from sword fighting to ballet. Alongside her, we have Kumail Nanjiani, who is playing a master swordsman named kingo Sunen. Eternals will feature two of the Game of Thrones stars.

Who are the Eternals?

Eternals is based on a comic book written by Jack Kirby for Marvel which began in 1976. Set millions of years in the past, it sees powerful aliens called The Celestials experiment on humans. While doing so, they create a race of superhumans known as the Eternals and a second villainous race, The Deviants.

The Eternals and The Deviants battle each other throughout history, as well as warring Gods from ancient Greek, Norse and Roman mythologies. Later, the Eternals leave Earth to explore other planets.

Richard Madden is officially playing “Ikaris.” Ikaris occupy powers like flight, psychic powers, healing factor, strength, durability, and cosmic energy manipulation. That is not all, guys; the second GOT star is Kit Harrington, who is playing Black Night (Dane Whitman). Salma Hayek is playing Ajak, leader of the Eternals. Other cast members are

Another famous person that is rumored to be in the movie is John Wick (Breathtaking!) What is the Plot of the Eternals

No official plot details have been shared by Marvel Studios yet. In spite of this, clues about the plot have been pieced together based on leaked set photos and hints dropped by those involved with Eternals in interviews.

“The Deviants are an offshoot of the evolutionary process that created sentient life on Earth instigated by the alien Celestials, and wage war against their counterparts, the Eternals. According to the account of one Deviant in the 2006 mini-series, the Deviants were created as a delicacy to be consumed en masse by Celestials at periodic intervals once they multiplied sufficiently; however, the veracity of this has yet to be proven. While the Eternals possess godlike power and are generally physically beautiful (by human standards), the Deviants (who sometimes refer to themselves as ‘the changing people’) are for the most part hideous (again, by human standards), with each member of their race possessing some random physical and/or cosmetic mutation that is by Celestial design never repeated within the sub-species.”

Feige also previewed some Eternals footage from CCXP, which Collider summarized in a brief report. The new footage included shots of Keoghan’s Druig walking out in his armor and joining a team line-up; a blonde Jolie as Thena, wearing white and smiling at someone or something; Chan’s Sersi and Madden’s Ikaris holding hands by a fountain; Hayek’s Ajak riding a horse into battle and, at another point, saying, “These people have changed all of us. We must protect them,”; and Nanjiani’s Kingo wearing very colorful garb and surrounded by dancers in a Bollywood-style dance sequence (a fact recently confirmed by the actor in an interview on the New Hollywood podcast, via The Daily Dot).

We here at Inverse also reported on the CCXP footage and a possible Thanos connection thanks to even more comments made by Feige during his time on the CCXP stage.

“Thanos in the comics was an Eternal on Titan, so there may be connections. But really this is about introducing those ten new characters that are played by an incredibly eclectic amazing group of actors that we’re focusing on.”

Previously, we reported on a possible plot leak listing Babylon 800 B.C. as a setting and time period. Other leaks indicate that Game of Thrones star Kit Harington plays archaeologist Dane Whitman, perhaps in the present day, who discovers evidence that the Eternals exist. This may or may not happen in a place called the Tomb of the Gods. Chan’s Sersi might fall in love with Whitman. This forbidden love could serve as the central conflict in the story, or at the very least play a major part. The whole thing is said to have ancient aliens vibes, according to Marvel Studios president Kevin Feige.

When Zhao was announced as director in September 2018, further details emerged that the film was a “love story between Ikaris, a man fueled by cosmic energy, and Sersi, who relishes moving amongst humans.” But, it seems like things have changed since then.

Eternals Trailer: When can we watch it?

Sadly, Marvel has not revealed when it is gonna drop the trailer. Fans were hoping that they might get a glimpse of the movie at San-Diego Comic-Con 2020 but no luck. There is a lot of hype about this film, and it is hard to wait. However, we guess that fans might have to wait a bit longer for the trailer, but we did get a glimpse of the fanart of Celestials, they created the Externals.

Is There a Trailer For ETERNALS?

There is no trailer for Eternals just yet. Even though the film is set to arrive in November, it’s likely we’ll get to see the first trailer for the flick at a major event, like, say, San Diego Comic-Con 2020.

How to Watch Eternals for Free